The path of an Animal Tamer is a long, oft times frustrating one, but with the ability to control animals and monsters, becoming a Tamer is a lucrative profession if given the time and patience it needs to be raised and mastered.

The following tweaks were implemented per patch notes Sept 23, 2019 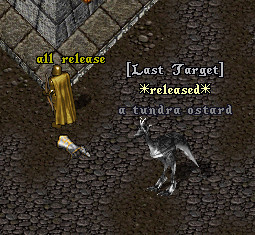 For every 0.1 skill you gain from taming creatures, you bank 0.1 passive taming points, to a maximum of 2.5 points banked at one time. You use these gains by killing monsters with your pets. You have a chance to get a gain from anything your pets kill, but harder monsters have a higher chance to give you a gain. You can help your pets kill the monster, they just need to do damage.

The best way to use these gains is to tame creatures from 50 taming skill to 52.5 taming skill, then kill things with pets to go from 52.5 to 55. Then repeat this process by taming creatures that require 55 taming from 55 to 57.5, killing things to 60, and so on. The reason for this is so you have the highest chance to fail while taming creatures because the taming skill brackets start at every 5 skill. You will gain Taming skill faster while failing than succeeding and having to find a new creature.

Each creature contains a maximum pool of available points which can be cumulatively earned as skill gain to the totals shown below:

Credit to Ahamkara for the Passive and Direct Taming Gain writeup