The Damage Tracker can be launched from the Outlands Overview help page via the Damage Tracker tab. Players may also type [DamageTracker to launch it as well. Players can let the damage tracker run continuously, or can specify a specific Duration that they want to run the tracker. By clicking the Stop After Duration button, the tracker will automatically stop running when the amount of time listed in the Duration area has elapsed. Players can increase/decrease the Duration by 1 minute with the inner arrow keys and by 5 minutes with the outer arrow keys. 24 hours is the maximum length of time the damage tracker will record.

When the player inflicts damage, via melee/ranged attacks, Spells, Poison, via Provoked Creatures, via Tamed Followers, or they or their tamed followers take damage themselves, the damage is added to its related category total. The Damage Tracker updates these values every 5 seconds (i.e. it may take a few seconds for damage inflicted in game to be reflected in the damage tracker). The Total number, listed in teal color, represents the total damage the players has inflicted from all damage categories toggled. If a player wishes to remove a damage category, so its number is not added into that total, they can deselect its corresponding box.

Under the Statistics region, players can see their calculated DPS (damage per second), DPM (damage per minute), and DPH (damage per hour) which are calculated based on their current Total damage vs the amount of Elapsed Time. Players can click the arrow at the bottom of the Damage Tracker to collapse/expand the window to show an in depth or consolidated version of the tracker. 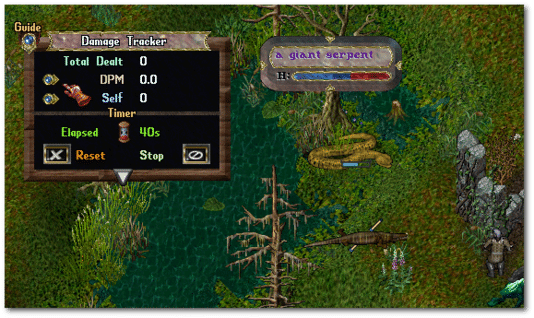 In the collapsed version of the Damage Tracker, Total Dealt at the top of the window shows the total damage dealt (based on the damage categories selected in the expanded window) as well as DPS / DPM / DPH and damage taken. Players can click the arrows to cycle the displayed Damage Over Time type as well as which type of Damage Taken (Self / Followers) is displayed.