Constant Open-World PvP is one of the main draws to the Faction system. With three different Factions to choose from, there will be plenty of spontaneous and exciting PvP encounters throughout the world.

The objective of a Faction Struggle is to be the Faction that earns the most points by capturing Control Zones in the area. Each Faction Struggle takes place in one of the cities of Avadon and alternates between Mounted and Unmounted combat. You can get information about an upcoming Faction Struggle by typing [Factions or through the Guild menu. These large scale battles are 30 minutes long and occur every 4 hours.

For even more fast paced PvP action, Flashpoints are a "King of the Hill" style event that will occur at random intervals in between scheduled Faction Struggle times (typically two of them will fall in between each Faction Struggle). With only one Control Zone to fight over by all three factions, this 15 minute battle is another great way to earn Faction Reward Points and Guild Prestige.

Players can spend their earned Faction Reward Points on many unique items by opening the Guild Menu, clicking Faction, and then clicking the gem next to Spend Reward Points. More rewards will be added over time. 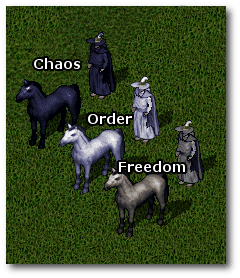