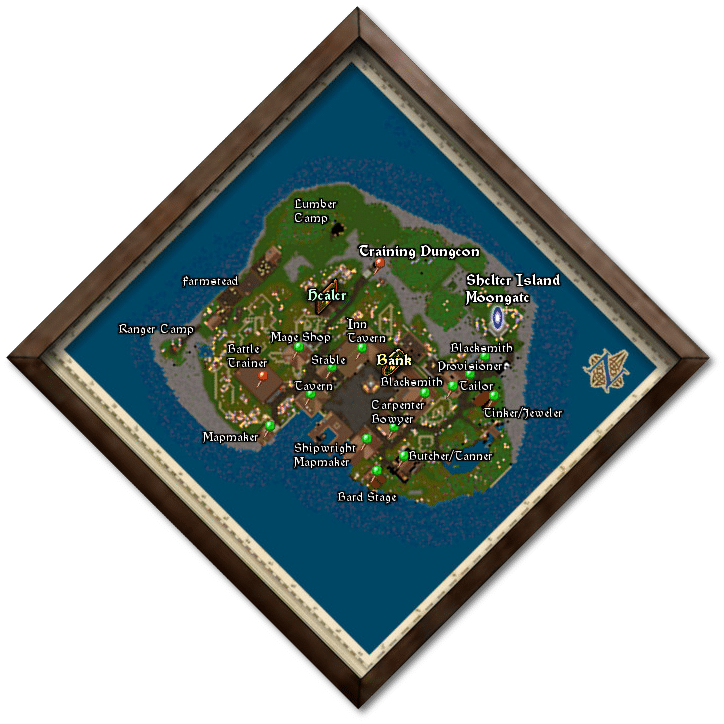 When players log in with a new character, they will immediately receive a Shelter Island Window that gives them three options:

If the player closes the window without selecting either the 2nd or 3rd option, the window will reappear the next time they log in until chose one of those two options. 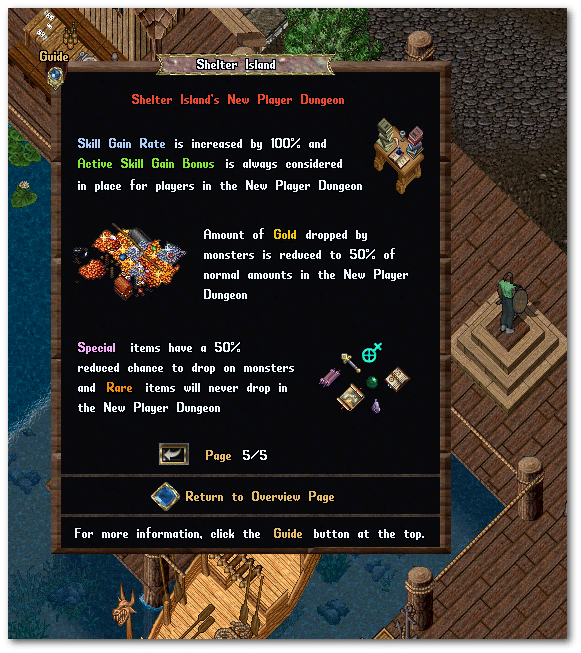 Players will lose Young Player status if one of the following events occurs:

If a player attempts to use a player-made moongate, public moongate, cast recall, use a teleporter, or get on a boat, they will receive a confirmation prompt asking them to first Renounce their Young player status. If they decline, they will not be able to travel to the location.

Once a player loses their Young Player status, all Newbied items they have equipped, in their backpack, or bank box will lose its status. Any Non-Young player that picks up or uses a Newbied item will cause it to lose it's Newbied status.

The History of Shelter Island

Nestled in Reaver Bay, between the Aegean Peninsula and Cambria lies Shelter Island. Mad Emperor Linus reigned as the last ruler of the united Prevalian Empire from 469AC to 490AC. Unprepared for and unsuited to rule, Linus issued many strange edicts, among them the order to create an entirely new island ‘shelter’ to house the sick and infirm that he held responsible for the slow disintegration of his empire.

Prevalian engineers and mages set to creating an artificial island in the shallow Reaver Bay. As soon as this mighty feat of construction was completed, Linus began deportations of ‘undesirables’ from the streets of Prevalia, Andaria and Cambria. In his haste to be rid of these scapegoats, Linus neglected to provide any facilities or support for the reluctant new inhabitants of Shelter Island. These first deportees simply tore each other apart in a desperate struggle to survive. Legend has it that many of their ghosts still stalk the caves beneath the town.

Today the island - and the town upon it established by the Prevalian rulers that followed Linus - are viewed as a neutral safe haven, free from the wars that have ravaged the cities of the mainland.