Difference between revisions of "Cambria" 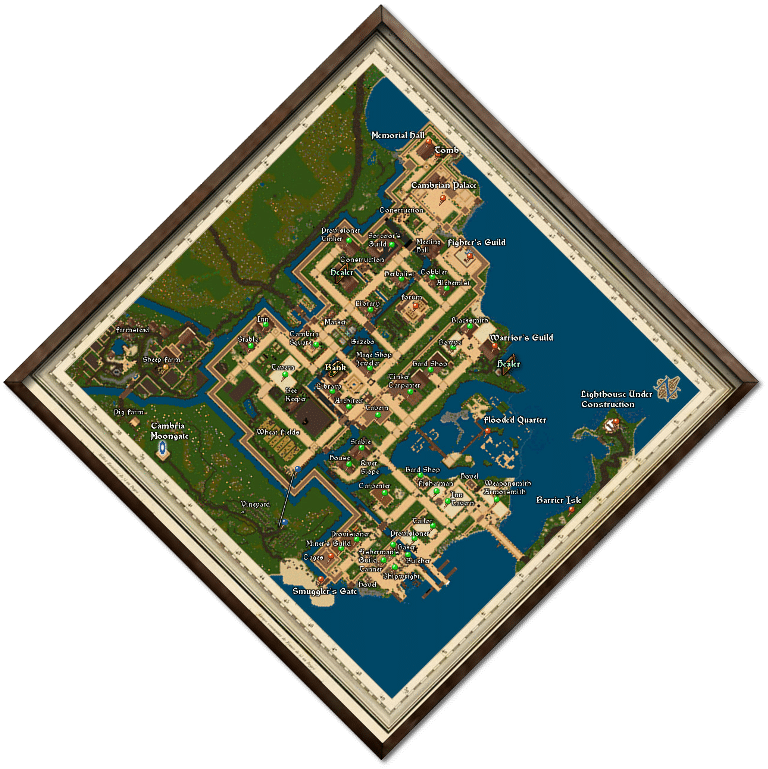 The History of Cambria

The cataclysmic events that unfolded upon the shattering of the Gem of Immortality greatly deformed the world of Britannia, turning it into what is now known as Avadon. 140 years past the day of the initial cataclysm, a new sandstone city in the spirit of the old Trinsic rose up, dubbed Cambria.

Due to decades (or perhaps over a century) of extreme heat in the southern reaches of the Realm, a large desert formed in the southwestern area of the Avadonian mainland. Cambria evolved in this climate, it’s people becoming quite accustomed to the blazing heat of the sun (much to their chagrin when they travel northward to Andaria!) Tropical fruits and plants thrive all around Cambria, and those along with precious gemstones found all along the rocky coasts became their primary exports.

For the first 100 years or so of Cambrian establishment, the Cambrians utilized their time more leisurely than the peoples of Andaria or Prevalia. Due to the warm climate, it was easy to grow food, and shelters did not need to be as fortified as those in Andaria, as there was no biting cold to ward off even during the winter seasons. As such, Cambrians enjoyed fighting as a hobby instead of a profession, and both a Fighter’s Guild and Warrior’s Guild were established in the city. Fighting for personal betterment as well as entertainment was a way of life in the early days of Cambria.

War with Prevalia and the Rise of the Condottiere

Around the year 251 AC, contact was made at the northern Cambrian borders with Prevalia for the first time. The Prevalians sought conquest and waged war with Cambria (as well as with Andaria at this time). Although competent if not superior fighters individually, the Cambrians did not fare particularly well in battle against a professional Prevalian army. For this first year of the war, Cambria was beaten back time and again until the Prevalian forces sat outside the Cambrian gates.

Somewhere between 267 AC and 275 AC, a wide gap in historical records, King Aron of Prevalia succeeded in finally defeating the Cambrian Condottiere and occupied Cambria. King Artemius surrendered his crown and knelt before King Aron or Prevalia. With his capitulation, King Artemius was allowed to remain a Lord of Cambria upon pledging fealty to the new Emperor of Prevalia.

In 315 AC, Cambria gladly joined forces with Prevalia and Andaria (combined having formed the first Avodonian Empire) in a sweeping campaign to rid the Outlands of the various monster tribes. The noble families of Corsair and Montague of Cambria laid waste to the gargoyle strongholds that pockmarked the desert west of the city up until this point.

It was in 327 AC that Prevalian Emperor Laric married his sons to the daughters of Andarian and Cambrian nobility. The Cambrian nobility were pleased with this arrangement, and it strengthened their relationship with Prevalia.

Secession from the Avadonian Empire

Much like Andaria, Cambrian nobles grew angry over the governing of the “Mad Emperors” that reigned over Prevalia during the years of 441 AC through 490 AC. As Cambrian discontent grew at the poor governance of Prevalia, the nobles spoke openly of secession. Cambria formally seceded in the same year as Andaria, in 491 AC, after the death of the Mad Emperor Linus. Cambria went to war with the other two Kingdoms the following year.

During these troubled years, in 468 AC, Cambrian prospectors surveying the desert discovered a large burial chamber surrounded by ruins. This becomes known as the Ossuary. 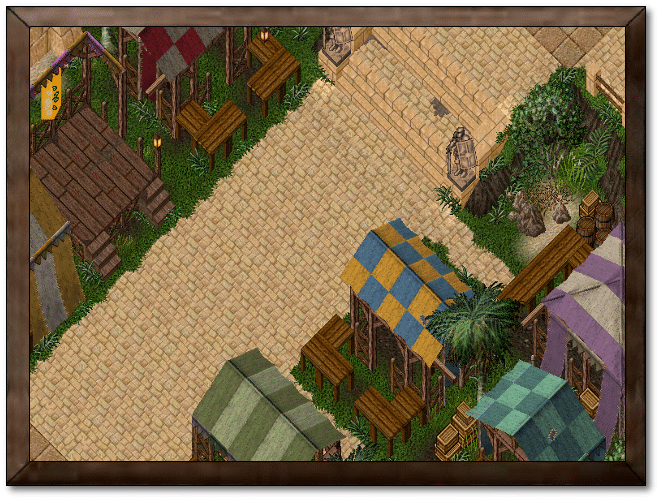 Newfound Wealth and the Rise of Cambrian Power

While fighting a war on its northern border, Cambrian royal coffers began to run low due to prevalent strategy of outsourcing their fighting power to the Condottiere. Cambria was running low on gold to hire mercenaries to continue the wars against Andaria and Prevalia. With a shortage of precious gems being found, a prospector team was sent to the Grey Desert, on Greypeak Island. Fortune smiled upon the Cambrians as a substantial gold vein was discovered upon the island in 552 AC. King Venriel of Cambria used this newfound wealth to hire the most infamous Condottiere, the Dark Banner Company, led by Captain Landau. The Dark Banner Company, among other Condottiere, were put under the leadership of Lord Falthar of Cambria, the grandson of King Artemius and son of King Venriel.

The Siege of Prevalia and Betrayal

In 558 AC, Lord Falthar led his Condottiere and Cambrian forces northward into Prevalian lands and successfully laid siege to Prevalia. Lower Prevalia is sacked and the population put to the sword at Lord Falthar’s command. In an attempt to end the siege without much more loss of life, the Prevalian Emperor sent his personal champion, a warrior named Owaen, to challenge Falthar’s champion. Falthar chose Captain Landau, and the Captain of the Dark Banner Company single-handedly defeated the previously undefeated Owaen. The siege continued for two more years, with only the Prevalian navy and the high white cliffs managing to keep Upper Prevalia relatively safe from Lord Falthar’s forces.

It remains unclear exactly as to why Captain Landau turned traitor against Lord Falthar of Cambria. It was not unheard of for Condottiere to shift allegiances when paid more by opposing sides. However, the fact that Captain Landau took Lord Falthar’s body with him all the way to Corpse Creek and chained the body up over the river speaks to a more personal motive. Perhaps Lord Falthar gave the Captain of the Black Banner Company an order that he did not wish to carry out? Or maybe Captain Landau was rebuffed by Lord Falthar in some personal matter? Whatever the case may be, it was a deciding turning point against the Cambrians in their campaign against Prevalia.

The Decline of Cambrian Influence 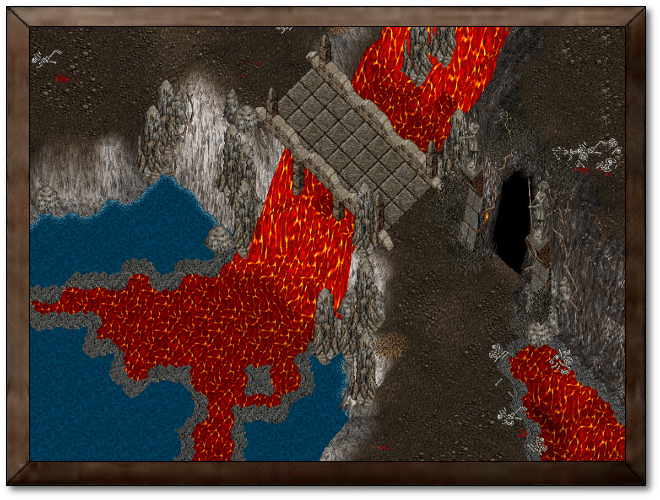 For the next 40 or so years, Cambria held on to its own borders, but did little else. The Dark Banner Company took with it much of the gold from the Grey Island gold vein, and the Cambrian coffers could only afford to pay enough Condottiere to hold the border gates. In 604 AC, Luka, the son of Lord Landau and Queen Klara of Andaria, led the Dark Banner Company on raids deep into Cambrian territory.

In 606 AC, the Cambrians mounted a strong defense against the encroaching forces of Luka and the Dark Banner Company. The Cambrian army fortified itself in the mountains north of the great desert at a location known as Break Pass. Rumors surrounded the camp stating a black moongate was seen within Luka’s field encampment the night before. When Luka led his army against the Cambrians, his forces were bolstered by a great number of ogres and trolls. The Cambrian force was routed handily at the battle of Break Pass.

The Eruption of Inferno

After suffering a crushing blow by Luka the Cruel, Cambria was once more rocked by catastrophe the following year. The volcano, now known as Inferno, erupted southeast of Cambria. Great plumes and spires of ash and rock hurled through the sky and for longer than a fortnight, Cambria was covered in darkness. The resulting tidal waves caused by the eruption flooded and destroyed a large portion of Cambria, where it remains underwater even today.

Once the ash and dust of Inferno settled and the devastating toll of the constant warfare and natural disaster was assessed, the Cambrians were ready for peace.

The Peace That Never Was

The fateful day to discuss peace came in 609 AC. The Cambrian King joined the Prevalian King and his son, along with a ranking Andarian diplomat in the Ancient Glade to discuss peace between the three Kingdoms. Each sovereign sent away their personal retinues. What happened next is anyone’s guess. When the respective retinues returned, the Kings and the diplomats were gone. Instead, a black moongate stood in its place. There were many in Cambria, still bitter about the defeat at Break Pass, who openly blamed Luka the Cruel for their King’s disappearance.

That same year, King Arshiya rose to the throne when it became evident that his father would not be returning immediately, if ever. He pulled the remaining Cambrian soldiers and the few Condottiere left in the Cambrian employ back to the city gates. Unable to secure funds for additional Condottiere, and still recovering from the natural disaster of Inferno’s eruption, Cambria can do little more than merely protect its immediate borders. Bandits, rebels, and tribal creatures very quickly filled the power gap in the southern region.